Albyfarms Produce Pty Ltd goes back to the 1970's, when a young John Albanese purchaced his very first vineyard property.

After growing up on the family farm, growing tomatoes and other vegetables for markets, he married and decided to spread his wings and go out on his own.

John soon realised that growing consistent top quality table grapes was key to success and so he started focusing his new plantings toward this.

As his farming techniques were succeeding, he started purchasing additional properties close by, developing them into prime table grape producing vineyards.

John and his wife Rita continued this way for many years, along with the help of their two sons Robert and David.  Both Robert and David grew up on the family farm, working on the farm between school and sporting activities.  This enabled them to learn all the great growing techniques from their father.

As John's sons grew up, the family unit continued to work together, making the farms the success in which they are today.  Hence the reason why the 'Alby’s Grapes' label has become widely known and respected.

Albyfarms Produce continues to expand by purchasing new land and converting to new plantings. Included in this, is being invested in new table grape variety programs, as well as growing and producing avocados.

Albyfarms Produce has been marketing and exporting their own produce since 2010. This has brought even more consistency and stability to their product, to their customers and to the business. 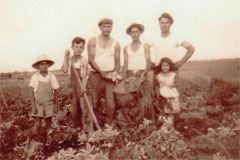 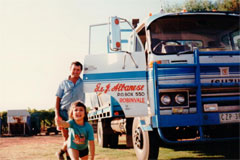 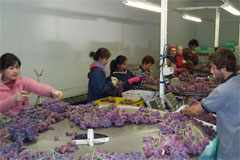